Chance encounter with a femto cell

I was recently performing some drive tests in a busy city centre and came across a femto cell in closed access mode. It was a chance encounter and I was only alerted to its presence by the automated TEMS voice indicating a failed Location Update. The first thing to note as indicated by the map below, is that this location in theory should have perfect coverage. What this shows (perhaps of no surprise) is that even in city centres, coverage holes do exist and people are forced to install femto cells for in-house coverage.

The second thing to note is that this is probably the worst place to install a closed access femto cell. The road is a busy one and to make things even worse there is a bus stop just outside! The amount of failed location updates must be in the in the hundreds if not thousands per day as a continuous stream of cars, buses and pedestrians pass through. A true closed access femto cell nightmare. The signalling trace below, shows the procedures involved as the UE tries to camp on the femto cell and gets rejected (cause code 13). 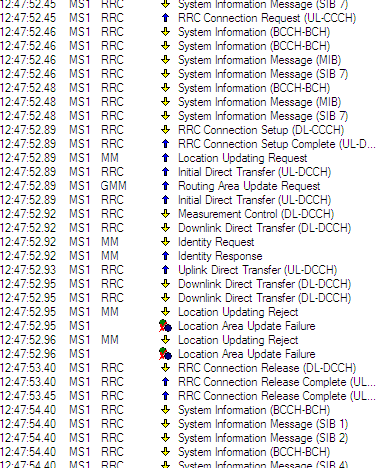 The time elapsed from reselecting the femto cell, failing to perform a LAU, returning to the macro and performing a further LAU/RAU (not shown in the trace) was approx. 6 seconds. So quite a large "outage" from the customers point of view. From a femto point of view we can expect the LAU attempt to be handled locally (i.e by the femto itself). The subsequent LAU/RAU back on the macro however is handled normally and as such the load on the core network is measurable. So what can be done is cases like this? Femto cells can be installed anywhere so how can the operator protect themselves? A few things come to mind. First detecting the problem. This could be easily solved by looking at failed LAU attemtps counters from the femto (if the manufacturer has implemented them). For an even more obvious detection method an NMC alarm could be created for when the amount of failed LAUs exceed a particular threshold. Once the problem femto is detected its CPICH could be reduced so it is not over-propagating into the street.
Posted by radio access blogger at 23:11